If you have anything to post on this website, send us your story, we put it on for FREE.
Just send an email with your text and one or two foto’s to:   editor@AmsterdamCentraal.com

Whatever you like, Amsterdam Has It. Find everything you need to plan a trip to our beautiful capital Amsterdam. Discover all the things to do and places to go, sightseeing, travel information and more on AmsterdamCentraal.com 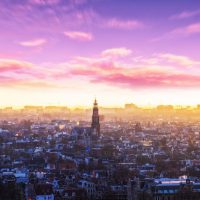 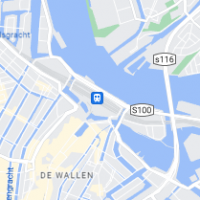 The station building designed by Pierre Cuypers was opened on October 15, 1889. The railways coming from the west and east ended before that time at the temporary terminals Westerdok and Oosterdok. Due to the opening of Central Station, these railway lines are linked together. The station area is built on three artificial islands.

Amsterdam’s name derives from Amstelredamme, indicative of the city’s origin as a dam of the river Amstel. Originating as a small fishing village in the late 12th century, Amsterdam became one of the most important ports in the world during the Dutch Golden Age (17th century), a result of its innovative developments in trade. During that time, the city was the leading centre for finance and diamonds. In the 19th and 20th centuries the city expanded, and many new neighborhoods and suburbs were planned and built. The 17th-century canals of Amsterdam and the 19–20th century Defence Line of Amsterdam are on the UNESCO World Heritage List.

Whatever you’re looking for, Amsterdam Has It.
Amsterdam has a lot to offer to the visitors of this great city. Whether you’re a backpacker, museum buff, shopper, cruise passenger, city-planning student, stoner or sex tourist, you’ll find what you’re looking for in Amsterdam.

Discover Amsterdam the way you want!
To help you on your way, here are some things to do in Amsterdam!

Admire well-known Dutch works of art. Amsterdam should rightfully be called a top museum city. The major attractions, the Rijksmuseum, the Anne Frank House and the Van Gogh Museum, are among the most visited museums in the world …
The most visited tourist attraction in The Netherlands is the canal tour in Amsterdam. Sightseeing in Amsterdam couldn’t be a more relaxing experience. Canal cruises are the ultimate way of getting to know the city. The canals of Amsterdam have been given World Heritage status by UNESCO …
The Leidseplein is one of the busiest centres for nightlife in Amsterdam. On and around the Leidseplein you will find many restaurants, bars, pubs, coffeeshops and cafés next to the various cinema’s and theatres …

The central station hall is named after the architect and is therefore also called Cuypershal. From this hall a middle tunnel passes under all platforms and from this, and also from the west and east tunnel located on the side, all platforms are accessible. The IJ and Amstel passages run through these tunnels, which do not give access to the platforms, but allow people to walk through the station without an OV chip card.

Amsterdam is the capital of the Netherlands and most populous city of the Kingdom of the Netherlands. Its status as the capital is mandated by the Constitution of the Netherlands, although it is not the seat of the government, which is The Hague. Amsterdam has a population of more than 800.000 people. The city is located in the west of the country.
One other plus is that (almost) everybody speaks English here.  This makes Amsterdam probably the most international oriented city in Europe.

Finding a Coffeeshops in Amsterdam is never difficult because most major neighborhoods will have several to choose from, so whether you’re in De Pijp, Leidseplein, Nieuwe Zijds, Jordaan, Rembrandtplein, or of course the Red Light District, just look for the familiar Coffeeshop sign …
Amsterdam has a very unique and rich market history. Much has been preserved by the market history, letting you enjoy this delightful market town. Centuries ago when the first markets started in Amsterdam visitors came from all over the world …
Vondelpark is often considered as the “green lung” of Amsterdam. You can have a picnic, attending a free live performance (for example a play, concert or sporting event) and even have a drink in one of the cafes located in the park … 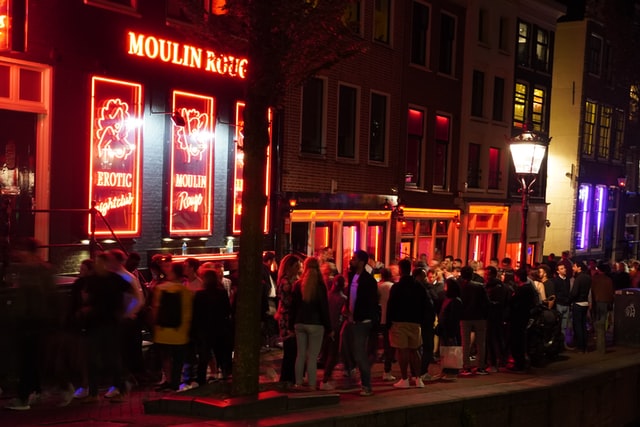 De Wallen or de walletjes, as the Dutch call it, is all about freedom, to show off what you please. Walk the streets of the Amsterdam Red Light District made up of stunning architecture and try not to let your eyes pop out of your head as you see things that are totally normal for the locals …
The city of culture, canals and cobbled lanes by day, transforms into a whole new city by night. Whether you want to have a drink with friends, enjoy a performance or dance until dawn, the city offers a varied Nightlife and there is always something for everyone…

The Flower market is a floating flower market offering a diverse range of flowers, cacti, house and garden plants, bulbs, seeds, plant pots, plant food, and gardening equipment. A wonderfully colourful place to wander around …
Rembrandtplein belongs with the many restaurants and terraces to the most famous entertainment areas in Amsterdam, especially in the evening when it becomes one of the hotspots of nightlife in the city, in addition to the red light district and the Leidseplein …

The station and surrounding area was a major building site for decades, due to the North / South line opened on July 22, 2018. In addition, the bus station has moved from the Center to the IJ side of the station building. Upcoming projects are the construction of an underground bicycle parking facility under the Open Haven front and the redesign of the alternating streets to the west and east of the station, so that line management can be unbundled and trains can arrive and depart faster. The platforms will be widened and platform-less central tracks will be removed.

Other Sites about Central Stations