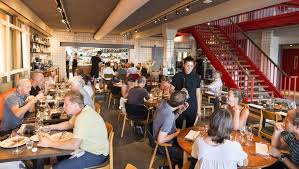 With both innovative and unpretentious plates and a fantastic vegetarian menu. We enjoy.

The most memorable, exciting things that I ate in recent years were, almost without exception, dishes in which vegetables played a leading role.

After all, both at home and in the restaurant kitchen there is almost always an ingrained pecking order, in which animals – meat and fish – play the leading role, where the plants – vegetables, starch – then serve themselves as ‘garnishes’.

Animal proteins were heavily fought in our hungry ancestors, the most expensive proteins we knew. But in this time of abundance, such an ingredient hierarchy often creates dishes that are quite similar in design and focus: with meat or fish as the centerpiece, and vegetables and starch for their glory and glory.

Of course, such a dish can be fantastic. But I think the excitement and innovation in the kitchen are pre-eminently to be found in a certain culinary democracy, in which a beet is not by definition seen as something that deserves less attention than a steak, and in which the main role and who the supporting role who indicates and who completes does not automatically arise from whether the ingredients were born as plants or as animals.

Choux is a new Restaurant

Opened by the gentlemen of the successful pop-ups Repéré and Foyer, is a hugely sympathetic expression of this kind of creative freedom. The name already invites philosophizing: choux is French for cabbages – traditionally the vegetables with the lowest status – but choux are also choux, expressions of refined, higher patisserie. Building on that, it also means ‘darlings, little dots’ (as in mon chou), and Choux thus combines the earthly and the higher with sweet contagiousness.